Many former pupils and staff of Hurst heard the news of Diana’s death back in December 2020 with feelings of profound sadness, for she was a much loved and respected member of the school community. She and Roger met in the early days of Roger’s headship of Hurst in the mid sixties when the school was somewhat different from today; smaller, all boys of course at that time and predominately a boarding establishment. Roger related the circumstances of their initial meeting in his book. In his first term Captain John Brown, Diana’s father, was running the school appeal and living not far away in Burgess Hill. He invited Roger to dinner where he met Mrs Brown and their youngest daughter Diana. When it came to leaving Diana asked him if she could “cadge” a lift, explaining that “actually I work for you. I’m a matron in the Junior School!” They managed to meet subsequently without anyone being the wiser and the secret was kept. Even when a flustered Bursar told him that Miss Brown had resigned and she was the best they had had for years and he must dissuade her! If you read some of the comments made by those who remember her as a junior matron, the Bursar’s assessment fitted the bill perfectly.

The engagement was announced in the Autumn of 1965 and they were married in the Chapel the following April. Diana has been described as the' right headmaster’s wife in the right place at the right tim'e. She was quite simply just what Hurst needed. The position of Head’s wife carries with it no job spec, other than the expectation that she would support her husband at the school’s public occasions. Beyond that the extent of your involvement was left to you. Diana seamlessly slipped into a role she fashioned, which effectively meant she was well and truly part of the school because of her all round contribution be it by entertaining guests, overseeing the flowers and other decorations in the Chapel or occasionally taking part in drama productions. This made her accessible to all and as a consequence a huge support to Roger and many members of the community be they staff or boys. Many a Shell boy left their house well fed after his new boys’ tea, always a plus in the eyes of any schoolboy, but also knowing that he’d found someone he could talk to and was interested in him as an individual.

On a personal note, as a student  from Durham and appearing for an interview at about six in the evening, I found a seemingly empty school. All, as it happened, were in Chapel but I was rescued and taken to the Head’s house, still in its old location then. Here I was met by Diana and made to feel so welcome that I stayed for 38 years! Little impromptu actions often reveal the real person. Early on in my time I was taking a third form PE lesson on the North Field on a lovely sunny morning. Diana appeared from the new house overlooking the ground. “Sorry to interrupt Mr Bettridge; did you know there’s going to be a partial eclipse shortly? I’ve smoked some glass so the boys can have a look safely.” I’ve never forgotten that and it was so typical. I think she found her self-devised job spec very rewarding and it assuredly helped develop the “Hurst atmosphere”, which remains part of the school to this day.  None of this means that she was trapped in the school, far from it, as they had three daughters to care for and there was her enthusiasm for riding too. This drew her to another interest which involved the charity Riding for the Disabled. It helped too when we found a whole lot of ponies had taken up residence on the Junior School field. The answer was to phone Diana. She appeared, rounded them up and led them away.

The end of the Lent term of 1986 marked the family’s departure from Hurst to live in Hanbury Cottage in Cocking as Roger took up his post as secretary to the HMC, which turned him into a commuter for the first time in his life while Diana remained at home. Diana, with no children at home by then, few people around and a limit on how much gardening and cleaning she could do, reckoned it was time to find a job. Roger’s secretary resigned at about this time and the result of that was they both started to follow the commuter trail! I am sure in the ensuing years as the secretary’s secretary, many a worried headmaster received the benefit of thoughtful advice from both of them.

Sadly life did not deal her the kindest of hands in the last few years, which was not what she deserved for hers was a life of true service and we have all lost a dear friend and a much loved figure from our lives. One who shines out as having made a huge contribution to the lives of many generations of Hurst Johnians as one of the friendly faces of their schooldays. All our sympathy and kindest thoughts go out to Elizabeth, Helen and Caroline and their families. 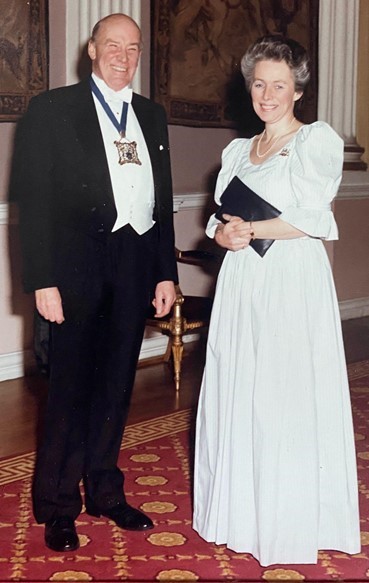 Details of awards for this year More... Donated by OJ Club in commemoration of the many years of service to Hurst of Derek Semmence who, for many years, was groundsman and cricket profession… More...